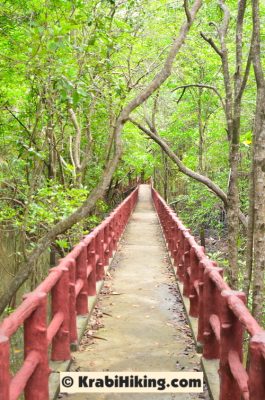 The Krabi Urban Forest Walkway was named the “Mangrove Walkway” in Krabi Town for years before they renovated and changed the name. This is a city-managed park that is ideal for nature lovers – especially bird watchers! There are dozens of species of birds to be found here, especially in the morning.

If you look closely at the roots in or above the water, you may see some mangrove pit vipers (T. purpureomaculatus), monocled cobras (N. kaouthia), or water snakes (E. enhydris).

There are also bugs, fish, water monitors (big lizards). On the trees around you, look for gliding lizards of the genus “Draco.” There are so many different birds, including kingfishers – some small and some very large. There are sea eagles flying above.

In the mud, you might see something that looks like fish. These are mudskippers. Snakes eat them, birds eat them. They fight with each other often – kind of funny to see them out of the water.

When you reach the end of the walkway, there is a platform where sometimes a longtail boat is waiting to take people across the water to the small cave on the island you can see across the river. This is cheap and a fun excursion.

You can also take any boat from the edge of the water in Krabi Town to this set of caves. The caves are called, “Khao Khanab Nam Caves.”

Some caution is advised because there are also monkeys here that are not friendly at all. We have been growled at and nearly pounced on. If you are walking down the walkway and see the monkeys, just turn around and come back another time.

It isn’t worth the risk of an attack. Not sure why the city doesn’t move this troop of dangerous monkeys, but it has been there for the decade+ we’ve been in Krabi Town.